"It is the atmosphere and the way of teaching that makes the course stand out” Bugsy Nolasco, Philippines

Why did you choose to join the course?

“I came to IPC because I wanted to experience Europe and improve my English language at the same time. When I stumbled upon information about the summer course at IPC, I just knew it was a perfect match for me”, says Sayuri Watanabe. She is 24 years old, from Japan, and is studying international communication. Next to Sayuri Bugsy Nolasco is sitting nodding his head. “I felt the same way… and I also wanted to go to a country where the citizens speak English so I could communicate with the locals”, says Bugsy. Bugsy is 32 years old and from the Philippines where he studies and work with human rights and psychoanalysis. Sayuri and Bugsy have both attended Summer Courses at International People’s College – Sayuri on the English Language and Danish Culture and Society Course and Bugsy on the Danish Language, Culture and Society Course.

What did you gain from the course?

“I think that the classes were amazing, and I learned so much in just three weeks, but I really feel that it is the atmosphere and the way of teaching that makes the course stand out”, says Bugsy, “the teachers become your friends – you can ask them anything and they make sure to make you feel comfortable speaking out loud in class”. “YES!”, Sayuri cries out, “before I attended the course, I felt embarrassed speaking English in public, but now I don’t mind it at all. I really learned a lot, and I think it is amazing that it was so much fun at the same time”, says Sayuri. Bugsy continues “I think I enjoyed it so much, because of the very holistic way of teaching. You go on excursions, you experience and learn about Denmark, you get friends from all over the world… like this you enjoy yourself and learn so much at the same time”.

What makes the course at IPC stand out?

“Most of all it is the school itself that makes the course special. It is hard to explain, but there is a certain ‘IPC-feeling’ at the school”, says Bugsy. Sayuri agrees, “I have been to other language schools in Europe and it is not the same… IPC has a certain atmosphere, it is difficult to put into words… I joined the summer course at IPC since it seemed like an excellent language course – I did not expect it to be life-changing. Three weeks can – surprisingly enough – change your way of thinking about the world”, says Sayuri and explains, “now I meet people differently – I think more about their world and thoughts when talking to them, and I greet the differences between them and me, instead of trying to agree on everything. Now I think that disagreeing is a beautiful thing”. 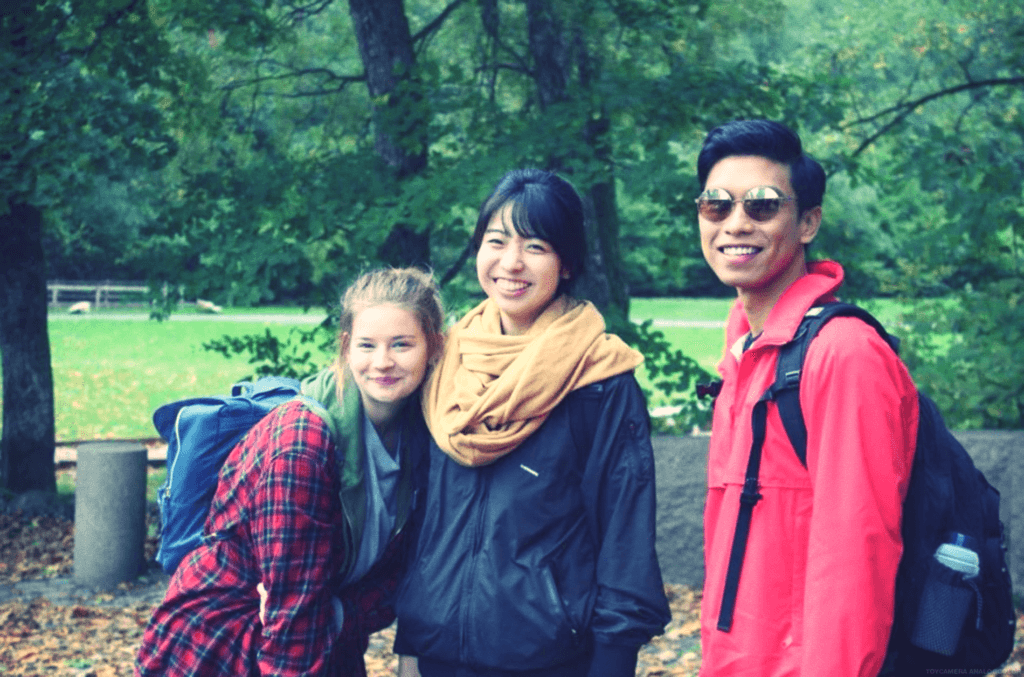 Sayuri (center) and Bugsy (to the right) on an excursion together with fellow students, Lucy Nagle (to the left).

What did you learn about Denmark and the Danes?

“Danes are very private, but very friendly and open at the same time. And they loooove the traditional Danish rye-bread, which I actually came to understand”, Sayuri laughs. Bugsy agrees “yes, and the Danish ‘hygge’ – Danes love to have bonfires, ice cream at the beach and bike trips in the forest, but that is understandable since the nature in Denmark is priceless. Denmark is really exceptional in the summer”. “I also think it was very interesting to learn about the welfare state in Denmark, since it is very different from back in Japan”, says Sayuri, “and it was amazing to experience the old castles in Denmark. We went inside a castle from the 18thcentury on a tour – that is an experience I will never forget.” Bugsy continues, “and the school is actually placed in Elsinore near the castle where Shakespeare’s ‘Hamlet’ takes place. That was pretty remarkable for me, since I am a huge fan of Shakespeare”.

“I think it is pretty amazing that we all came from different countries at the course. I became friends with two girls from Italy. One of them was from the north of Italy – the other one from the south. When they talked about their country and the differences between the north and south, I realized that Italy is very different depending on where you live in the country. That is something I never knew before,” says Bugsy. “I also think it is fantastic that you get friends from all over the world – like this you suddenly have friends to visit in all sorts of places”, says Sayuri, “you really meet the whole world at IPC”.